The second targeted area is the HUAIBEI and JIANGHUAI Plains located mainly in Anhui province of China. The province is among the least developed region in today’s China. Its GDP per capita is just estimated above 2000 US dollar in 2008, 28th among 31 provinces of the country. However, due to its geographic location and the prevailed climate, agriculture in the province is extremely diversified and occupies an important place in the country. The wheat sowing area of the province is on the forth position of the country while the soybean sowing surface is second at provincial level. The main agriculture products in the province are wheat, soybean, maize, and cotton on the north of the province, while rice and colza are dominant agricultural products in the south of the province. In this proposed action, the crop areas as well as the wheat yield will be assessed on the main agricultural production area on the North of the Anhui province, and particularly on a plain called HUAIBEI (North of Huai River). The rice yield simulation will target an important rice producing area between the Huai River and Yangtze River, called JIANGHUAI Plain, shared by the Anhui and Jiangsu provinces. 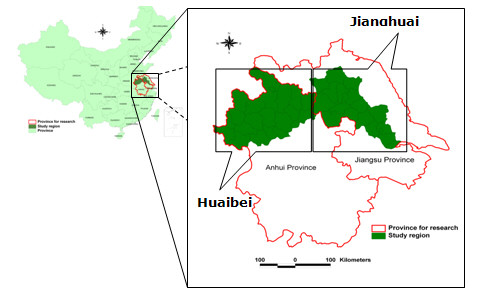 Location of the HUAIBEI and JIANGHUAI plains in China