Agriculture remains the most important economic activity in Kenya, although less than 8% of the land is used for crop and feed production. Among 20% of the land suitable for agriculture plantation, only 12% of that is classified as high agriculturally potential  because of adequate rainfall. About 8% is medium potential land. The rest of the land is arid or semiarid. About 80% of the work force engages in agriculture or food processing. Farming in Kenya is typically carried out by small producers who usually cultivate no more than two hectares (about five acres) using limited technology.

Although Kenya boasts one of the largest economies on the continent, with a highly developed agricultural sector ranked as one of the world's leading exporters of tea, coffee and flowers, the east African nation ranks near the bottom of the world in food security.

Environmental factors and a surging population play large roles in Kenya's food insecurity. Much of Kenya's eastern and northern regions are fairly dry, and inhabitants rely on seasonal rains to survive. On the other hand in the ten years to 2009, Kenya’s population increased by 35% to 38.6 million.

The primary food crops are beans, cassava, potatoes, maize, sorghum, and fruit. As in the early days of the republic, these crops are mainly harvested as subsistence farming today. 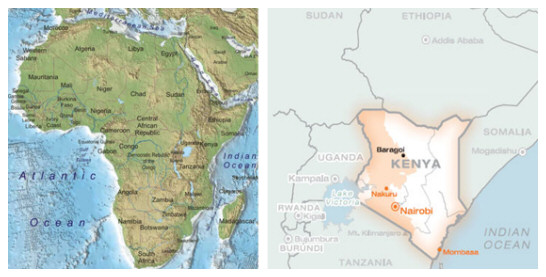